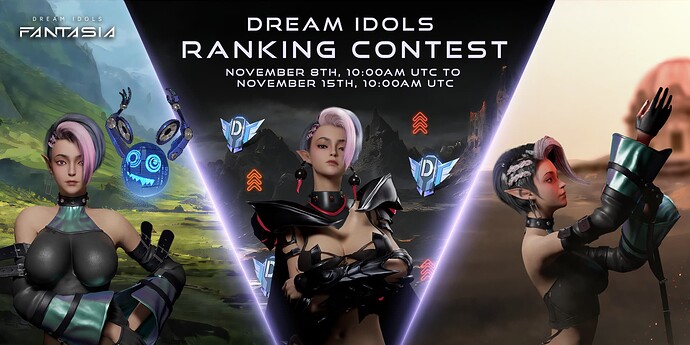 With the Dream Idols Beta+ test well underway, the team would like to thank our awesome community with a massively rewarding “Ranking Contest”!

From November 8th, 10:00 UTC to November 15th, 10:00 UTC, three contests will be held for our Dream Idol users. Do you think you have what it takes to take home the grand prizes?

From November 8th to November 15th, the top 3 Dream Idol users that have collected the most DREAM will be eligible to take part in a 300U prize pool!

The proportion of a player’s DREAM amount will determine how much of the prize pool they earn.

From November 8th to November 15th, a special event will be held for Genesis Producer clubs with the highest-earned Popularity and Reputation during the event period.

Genesis Producers will be eligible for the following rewards:

Starting on November 8th, the first player to enter the “Tower” SYNC Pool will be rewarded with 1000 BUSD.

This event will continue until someone has successfully entered the Tower SYNC Pool to provide players with sufficient time to build up their SYNC teams.

Whether it’s earning DREAM or climbing up the SYNC pools, there are plenty of opportunities out there for you to win a piece of the reward!

And don’t forget about your SP and max SP! Essential stats to increasing your SYNCing power and getting to the Tower pool.

Every little bit helps when it comes to Dream Idols so long as you’re committed every day!

If you have any questions about mechanics then there are always community members readily available to help you on our social media below.

**is a unique blockchain-based game ecosystem that aims to make blockchain features simple and fun for non-crypto players to own their NFTs.

Our winners have officially been decided!

Thank you so much to our participants and we can’t wait to host more contests for you all in the future!